"In a 3-1 vote, FERC in 2020 approved ISO-NE’s IEP, a program designed to steer about $150 million a year to certain types of power plants in New England during the winters of 2023-24 and 2024-25," reports Utility Dive. The program was meant to act as a stop-gap to maintain reliability for the next two winters until ISO-NE figured out a market solution for reliability issues.

"FERC Chairman Glick dissented in the decision over IEP payments to nuclear, coal, and hydropower generators without evidence they would change the way they operate," Utility Dive continues.

“Handing out money for nothing is a windfall, not a just and reasonable rate,”  Glick said at the time.

"FERC’s decision was appealed by a group of municipal utilities; the New Hampshire Office of the Consumer Advocate, the New Hampshire Public Utilities Commission, and the Massachusetts attorney general; and, the Sierra Club and Union of Concerned Scientists."

The federal court agrees with Glick and the rest. Rod Adams said that the decision was like "ruling that football teams cannot pay stars more money than practice squad players because extra money would not change star behavior or work patterns."

In a 2019 interview, the doyens of energy deregulation said that one of the biggest challenges electricity restructuring was going to pose was capacity investment. That's still true. Here's what one of them, Paul Joskow, warned:

"I think some of these challenges have been hidden by the fact that there is this large stock of existing dispatchable fossil generation. Basically wind and solar could free ride on them, in a sense. They provided the backup services. They were getting paid enough to cover their operating costs, but not much in the way of covering what would have been their ongoing capital costs. They’re exiting the market slowly. At some point, enough will exit the market where this issue is going to have to be confronted. How are we going to incent storage backup generation to come into the market given the current structure that we have? The current structure is unlikely to work."

Perhaps we should ask ourselves not whether paying for reliability makes for an unfair windfall but whether or not paying for unreliability is a cost too high. Who pays when the lights go out?

EIA: Expect New Oil and Gas Fields in the Gulf of Mexico

The Energy Information Administration expects that 9 new oil and gas fields will be added to the Gulf of Mexicon this year. The EIA forecasts "that new fields coming online in 2022 will account for 5% of natural gas production and 14% of crude oil production in the U.S. Federal Offshore Gulf of Mexico (GOM) by the end of 2023." 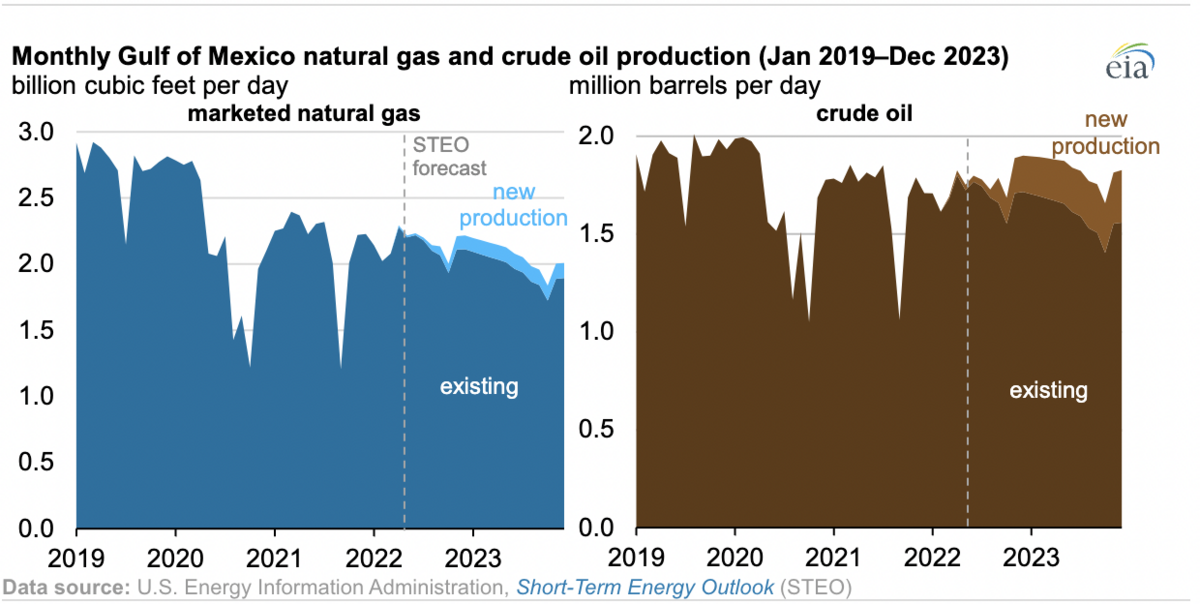 But we shouldn't get too excited. The news comes with caveats: 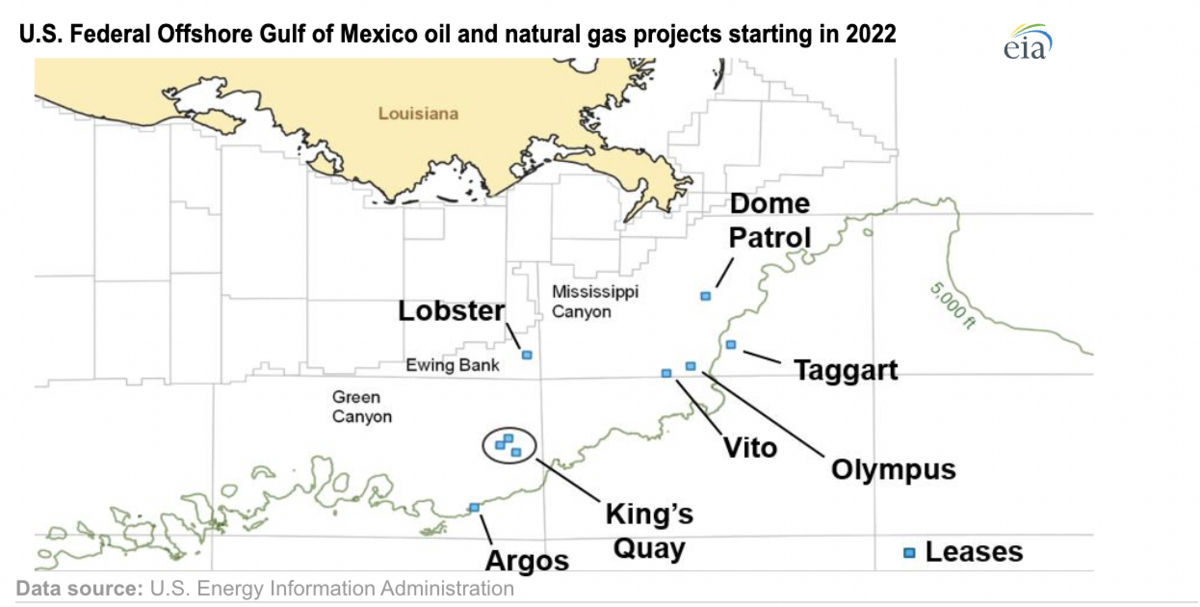 They expect the larger fields like Argos, King’s Quay, and Vito to start production in 2022. "Each has a peak production capacity of 100,000 barrels of oil equivalent per day (MBOE/d) or more, and each is the result of a focused effort to lower the costs of field developments."

US Refining Capacity Plummets to Lowest Point in 8 Years 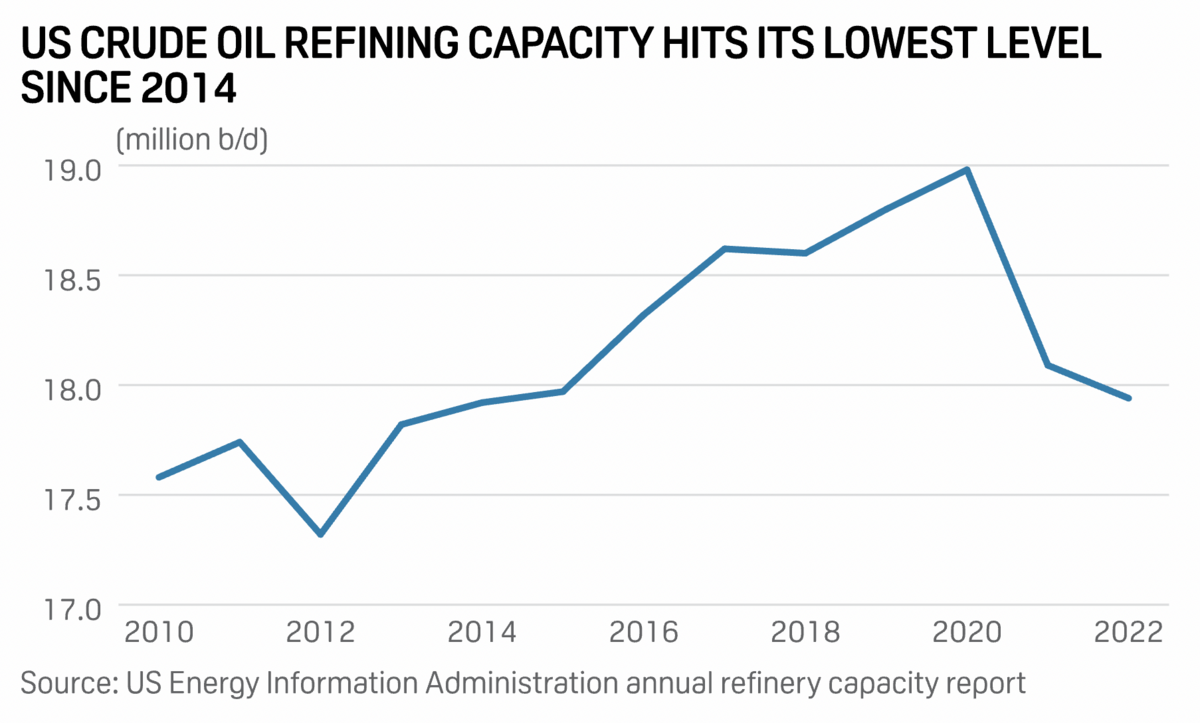 SPG reports the following reasons for the closures that have produced this dip:

America hasn't built a major refinery since the late 1970s. Granholm's meeting with the industry comes at moments of extreme vulnerability for both sides--the Biden administration is in a tight spot with rising energy costs and high inflation moving into the mid-terms, and, on the whole, the fossil fuel industry feels beleaguered, undervalued on, and pushed to its limits.

A measure of the efficiency of converting a fuel to energy and useful work; useful work and energy output divided by higher heating value of input fuel times 100 (for percent). (source) 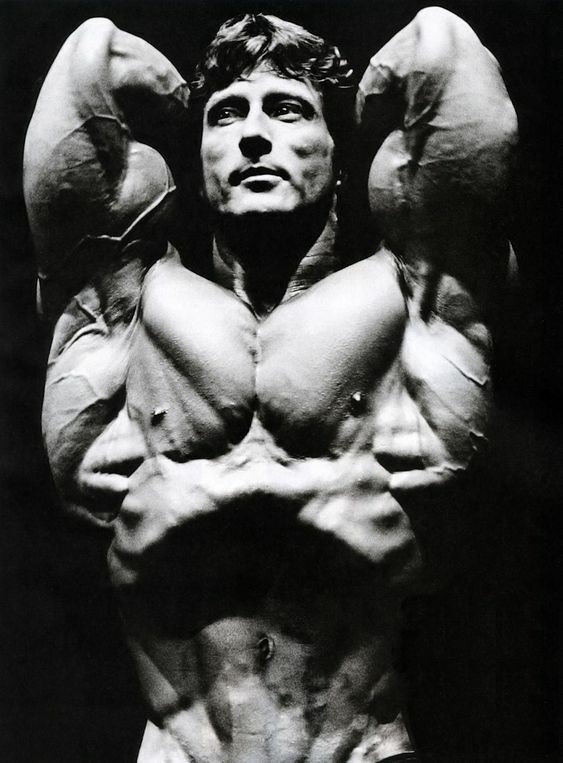